Skip to Content
Home / Blog / Adult Education / Gun Control: How Many Deaths Have to Happen? 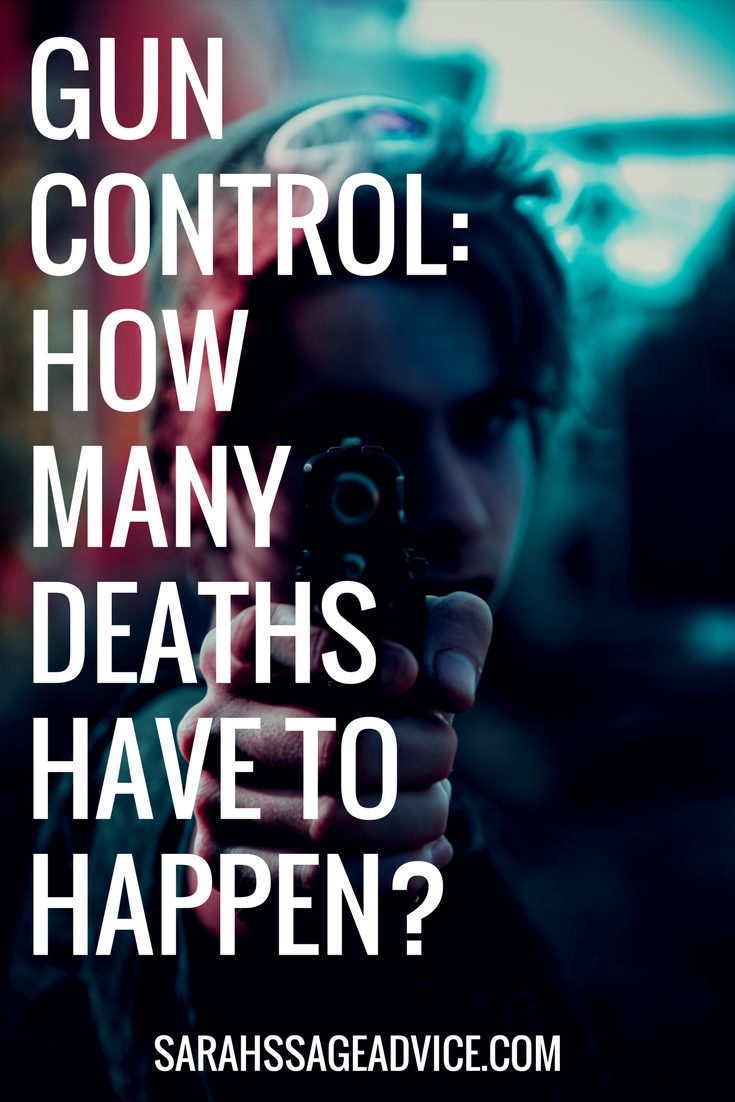 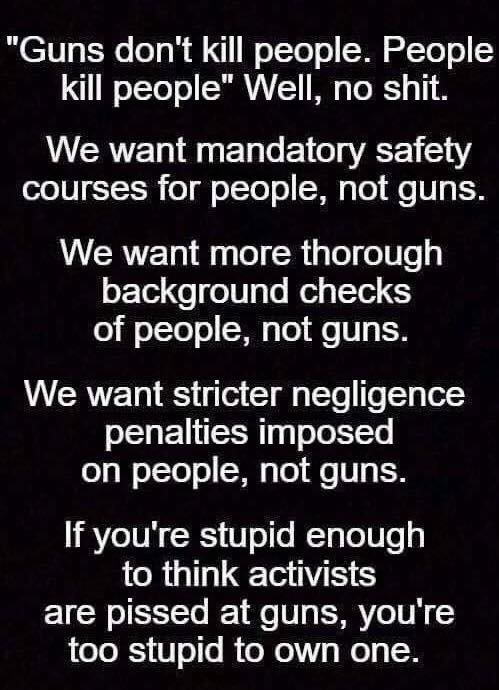 On Valentine’s Day another mass shooting occurred. Why do these keep happening? I debated for a while on whether or not to write about gun control, but I could not just let it stand. There are so many arguments against gun control and so many arguments for it. I’d like to highlight some articles, videos, and quotes I’ve seen online in the last week.

Time and time again I hear the argument that “guns don’t kill people, people kill people” this is correct however, people have a greater ability to kill, faster, more harm, more deaths, with weapons like guns.

Do we need to consider mental health? Do we need to make sure people with mental health issues are given greater access to healthcare? Do we, each and every one of us, need to be more aware of those around us? Be more empathetic? Notice others that may be having a hard time? Consider their needs? And offer help? Absolutely we do, but we also should restrict people with certain mental health problems, those that are aggressive, those that have suicidal ideation, those that show little or no empathy for others, from owning guns. 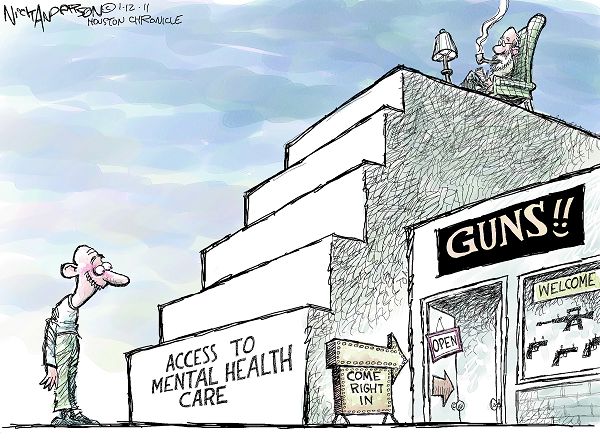 Guns in the arms of “Good People” 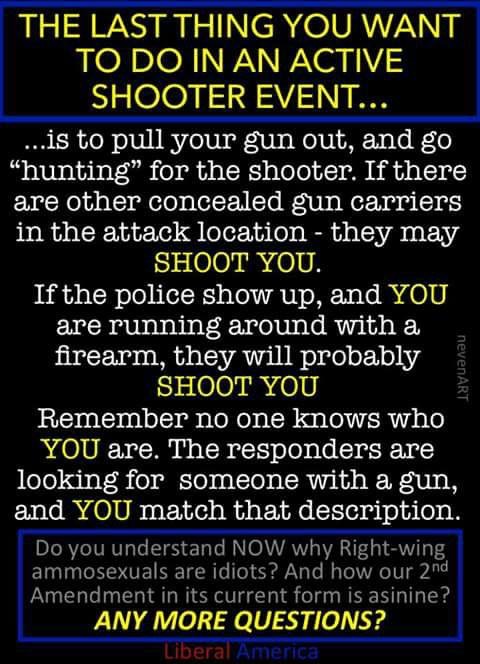 Guns in the arms of “Good People” can help stop a mass shooter quicker than the police arriving. I have to say, first off, when I see someone carrying a gun, that is not a police officer, it does not give me a sense of relief. I do not feel like I’m safer because a man there is carrying. Why? Because I cannot tell if one stranger carrying a gun is a “good person” or a “bad person.” I cannot know if this man with a gun in a holster on his belt, walking through the grocery store is going to save me in the instance of someone open firing or if he will be the one shooting senselessly.

As I look at my Facebook in the last week I’ve seen many different articles and posts about gun control, rightfully so, this one made me think a lot. If you are a bystander during an active shooter situation there is no credible way to tell the difference between you the “good person” trying to stop the “bad person” with a gun. If you have a gun out during an active shooter situation no matter if you are the one trying to protect others, you may be shot yourself.

A criminal robbing a gas station with a knife, unless he is some trained ninja, will not be able to harm as many people in the same time as it takes with a gun. Yes, crime will still likely happen even with gun control laws but the number harmed and even killed will be drastically lower.

Those For Gun Control

Those for gun control are not trying to take your guns away. We, as in those I generally agree with, those protesting, those lobbying, those fighting for stricter gun laws, are not trying to restrict your rights. What are they doing? What do I hope for? I hope for it to become harder for anyone to get a gun in their hands. I hope for background checks, I hope for waiting periods, I hope for mandatory trainings and classes, and I hope for it to become harder for those with any violent past to receive a gun. Will this stop our problem completely? Probably not. But it will help drastically.

“I Was Almost A School Shooter”

This video caught my attention today. While taking a break from writing this and feeding my baby I was scrolling through Facebook. I will read many sides of political issues as they arise. I try to be well informed to make an educated decision myself and there’s no better way to be educated then to hear first-hand accounts of those that know. This can mean either they survived a mass shooting, or in the case of this video, they were the depressed social outcast like the shooter.

I’ll just leave this one to this…. 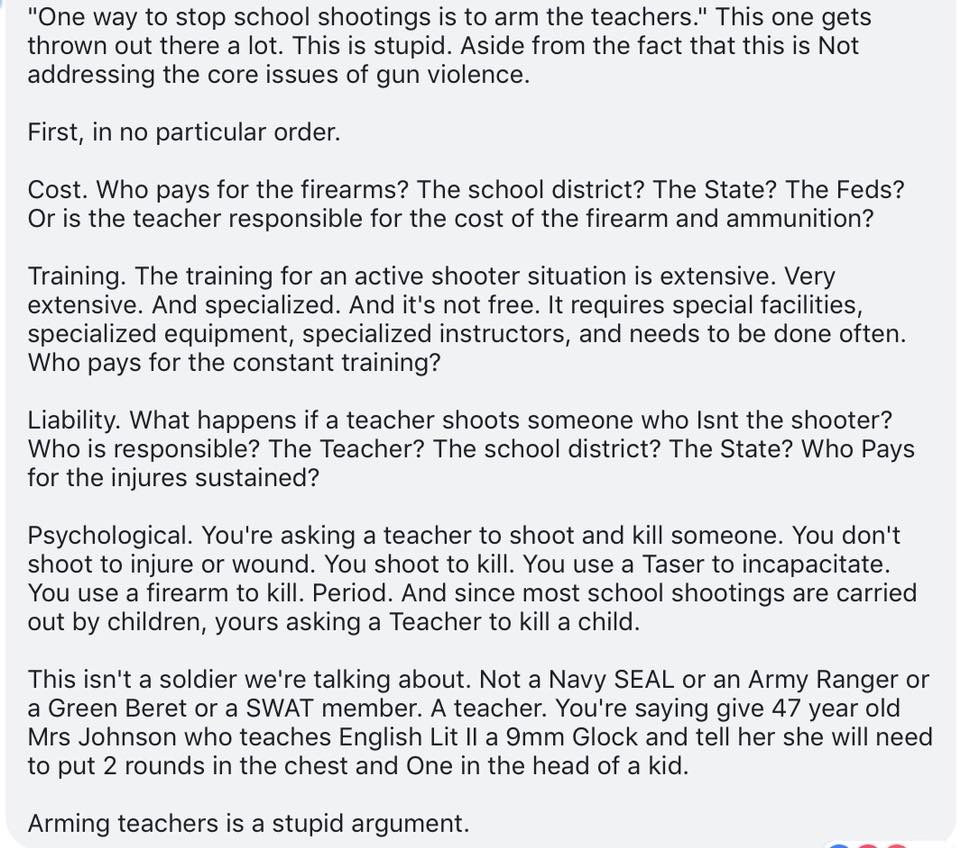 Is America Really That Self Centered and Egotistical?

I ask this as an American. I have been born and raised in Idaho (a Republican state). Over the last couple years, I’ve become more involved in politics and one question that arises in my head every time I see “Make America Great Again” is when was America so great? We seem to have to learn the slow and hard way that something needs to change and we cannot take statistics and evidence from other countries and think “maybe we should do that.” 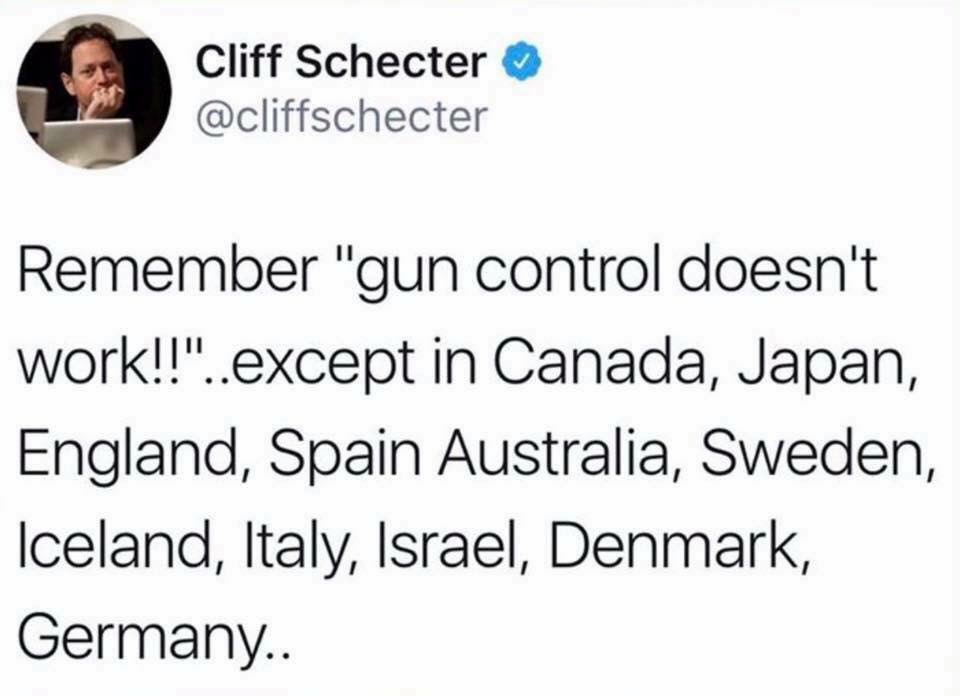 For example, Australia in 1996 experienced a mass shooting. After this event “semi-automatic and other military-style weapons” were banned. Since then there has not been one mass shooting even close to the magnitude. As outlined in this article there still have been instances of shootings, like in 2002 in Melbourne when two people were killed by someone carrying handguns. Had he been carrying a semi-automatic weapon, like an AR-15 that number would have been much larger.

I am not even going to touch on the NRA and the NRA donating to our politicians. Just getting into the lack of quality politicians is a whole other story, though it is definitely relevant.

Which is More Important, Guns or Lives.

I think the most important thing in this argument is we need to make a choice. Are our lives more important than our easy access to guns? Are we willing to risk more lives? Why are semi-automatic weapons and assault rifles necessary to you as a common citizen? Why is waiting a little longer for a background check a problem? 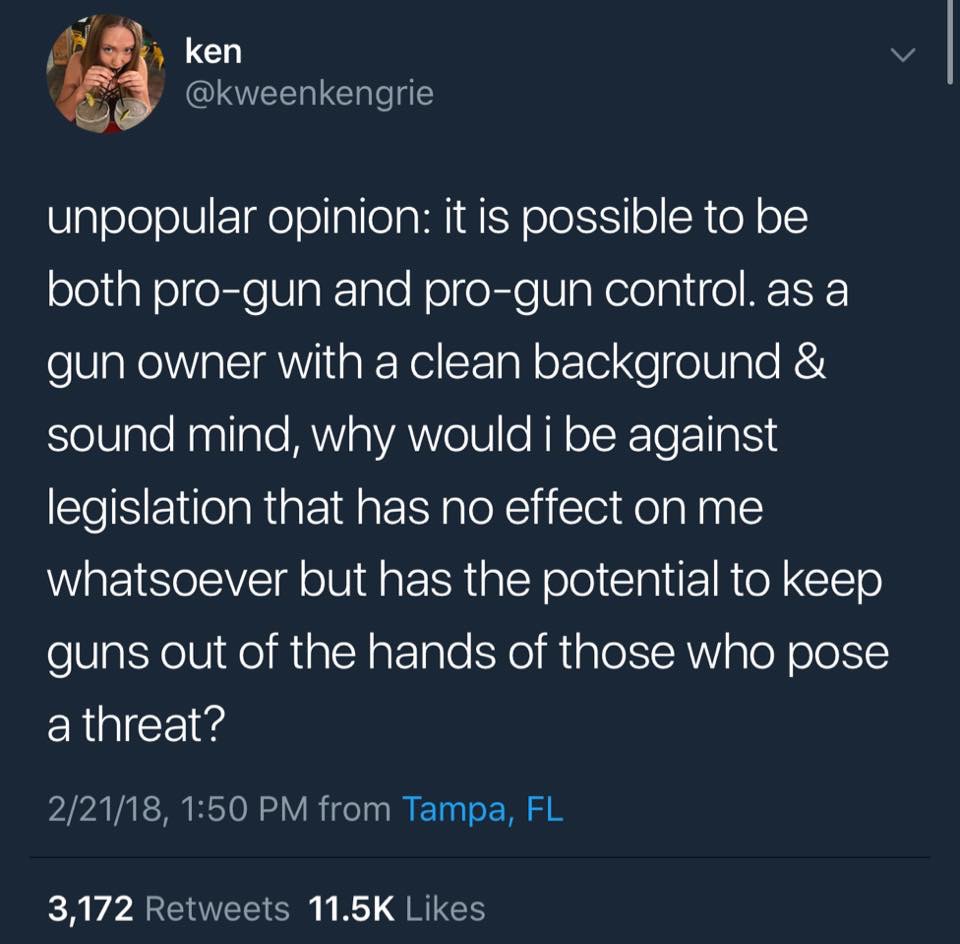 We need to make change. Some don’t believe gun control will do that, many are gun owners, and I respect the opinions of respectable, responsible gun owners. However, we cannot make opinions solely on our own experiences. We MUST be empathetic, learn, and grow from other’s experiences as well. Just because I have never been in an active shooter situation does not mean I should not be learning, feeling for those that have been, and supporting each and everyone of them. I am behind those respectfully and nonviolently raising their voices and protesting. I support those working to make change and I will be voting to do my part.

Why am I as a mom deciding to comment on this? Because, in 4 years my daughter will be going to school and I hope to God I can let her go without worrying about her being shot and killed by some psycho with an AR-15. 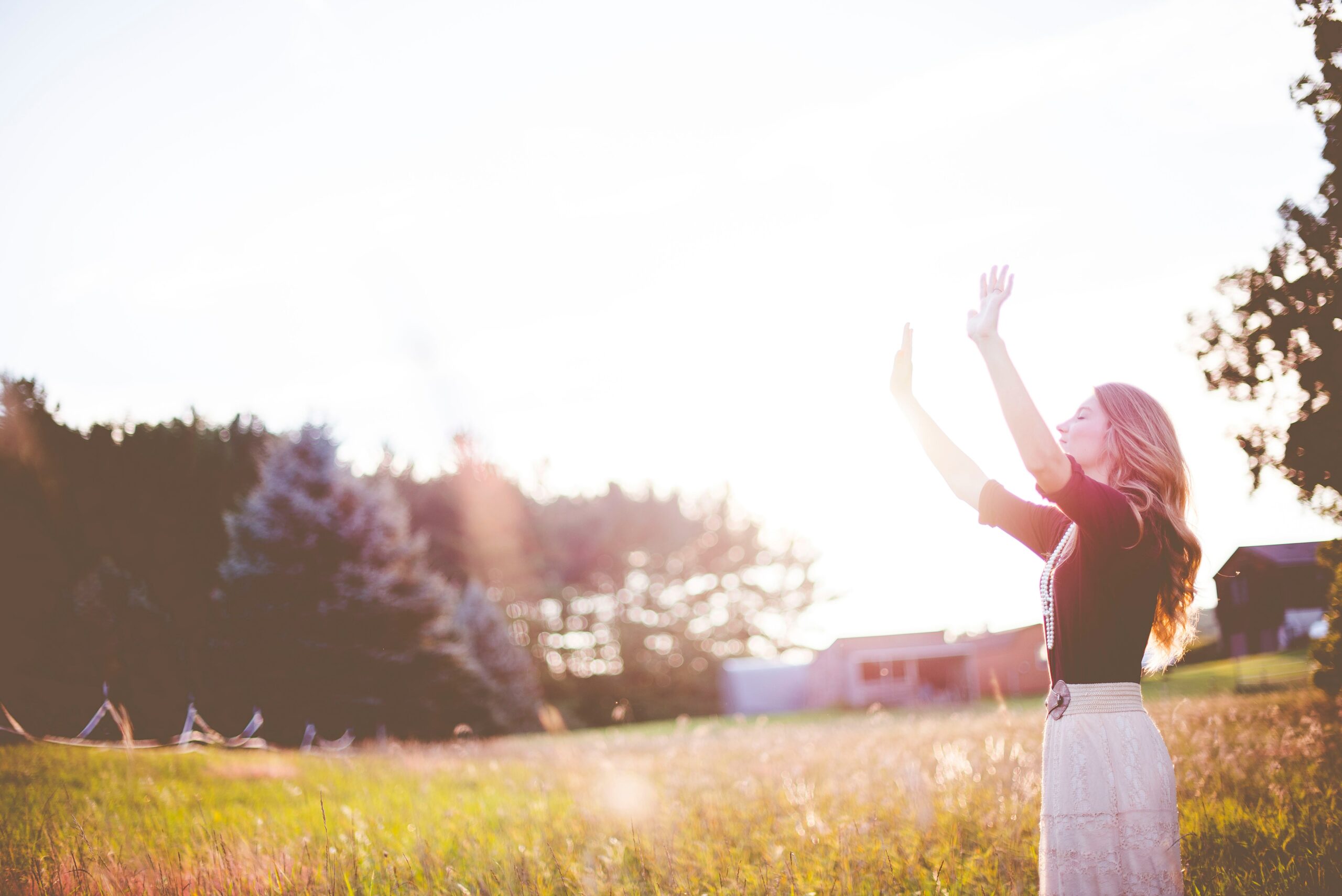 My Comfort Zone is My Worst Enemy: How to Break Down the Wall